It all comes down to this day. Literally. Every year, full of highs and lows, smiles and tears, without fail comes back to December 31st. Some people love this day, or more specifically, this night. New Year's Eve with it's promise of something new and fresh in the middle of a long winter.

If I'm honest, I've never been huge into the NYE hype. My birthday is at the end August, usually coinciding with the first day of school, so that's always been my personal time for new beginnings and a clean slate.

But this year, I find that the buzz about resolutions and goals for 2012 hits me in a way that it normally doesn't. So, in no particular order, these are my reading and writing resolutions for the next 12 months:


It's been a long and interesting 365 days to be sure. A lot has happened, some of it planned and a lot of it not so much. I could rant and rave about the unpleasantries, but I really don't see a point in doing that. I finished my first full year of grad school. I grew my hair out the longest it's been in 10 years and donated it to charity. I got a "grown up" job working in a high school library, leading to other grown up things like learning about insurance. According to Goodreads, I read 43 books (but I know the number is higher than that). I started and completed two first drafts of novels. I came back to this blog and started another one, too.

And, bonus!, someone else told me last night that I look like Anne Hathaway - I've officially lost track of how often I've heard that this year. I still don't see it, but I'll happily take the compliment.

It would be easy to focus on the fact that on the surface, my year isn't ending so great (I have a cold and a zit), but that couldn't be further from the truth. 2011 had it's ups and downs, but overall it was a good year to me.

May all of you celebrate safely and find much happiness and blessings in 2012. I have a hunch it's going to be a good one.
Posted by Monica Fumarolo at 2:45 PM No comments:

I am currently on Day 4 of my winter break and have actually been pretty productive in that time. Lots of cleaning has taken place, I got some fabulous new bookshelves from my parents, last night I went and saw the Chicago Blackhawks beat the Montreal Canadiens 5-1 at the United Center.

And, FINALLY, I've gotten back to the summer novel! Rereading, tweaking, rediscovering, editing, cleaning up, etc. Take your pick.

Now I finished the first draft back in August, so why did it take me this long to get back to it? For one, life got in the way just a bit. A new job, a new semester of grad school, and all that jazz. And then there was the November novel that I needed to write (a primal need, not like 'so-and-so decrees you must write a book this month!' need).

And, if I'm honest, I was a bit nervous. I figured that if writing a book was going to be anything like the infinite number of papers I've had to write for school, the first draft was going to be absolute crap. I was feeling so good about being able to say that I've written a draft of a novel, so how awful would I feel if I went back and read it only to discover that it was terrible?

So with great trepidation, I opened that incredibly intimidating document on my computer that contains so much of myself, and I began to read. To my absolute delight and total surprise, it wasn't nearly as bad as I had imagined it would be. In fact, I'm actually enjoying it. It turns out for me, taking a break from the story was a very good thing at least this time around. I'm enjoying seeing these characters again, reimagining them and evaluating the choices I made back when the temperatures were in the 70s instead of the 30s.

My Solstice Solution and advice is simple: take your time, but give yourself a limit. When I started November novel, I did so only by promising myself that I would go through summer novel at least once before the end of the calendar year. Like with any relationship, be careful about the idea of "we're on a break." Don't let the break somehow turn into a permanent one. Also, challenge yourself to look at your story through a different lens.  When this story first came to be, I looked at it as a writer. Now I'm looking at it as a reader - what am I enjoying? What makes me cringe (and is it supposed to make me do that)? Does that part feel too long/short/boring/awesome? I take note of these things as I'm going along and then I'll go back see what can be done to make them better.

So there are my two cents. In other news, today is the Winter Solstice! Okay, technically it was at 11:30 last night but according to my desk calendar it's today so without further adieu, the traditional "Monica standing an egg on its end because it's the solstice or equinox" picture! 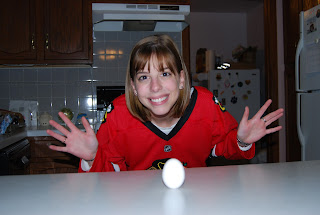 I am very proud to announce that today, December 11, 2011 at 6:27 p.m. CST, I FINALLY finished my first draft of my NaNoWriMo novel! I did hit 50,000 words before November 30, so technically I was a "winner," but strictly speaking I wasn't because the goal of that group is to complete a first draft in a novel in a month.

So it took me 41 days instead of 31. Minor details. Let's move on to the part where I get to do a happy dance!

Originally I gave myself until a week from today (the 18th) to finally finish my first draft. However, during the week I felt myself dragging and I was confused. It wasn't that I didn't know where I wanted my story to go - quite the contrary, I knew exactly where I wanted it to go, I just didn't know how exactly to get it there. So I decided to go back to what I was doing early on in NaNoWriMo and plan out an outline of what was going to happen with my story before I sat down to write it. I've been playing with that for a few days and today I found myself on a roll. I didn't expect to finish the draft today, but I think I mentally needed to. The subject matter and general tone of this story is not nearly as happy (happy's not really the right word, but my vocabulary is failing me right now) as the story I wrote earlier this year, but I think the combination of that heavier tone and the fact that I wrote it so quickly just meant I needed to wrap this draft up so I can step away from it for a while, go back to editing Summer Story (I think that will be my ultra-fun code name for that story), and moving ahead with that (whatever that might mean).

We all on the same page? Okay. Excellent.

So just to recap, I've now written two first drafts of novels in the past 7 MONTHS.

Thanks to my friends and family for their amazing support during this crazy journey! Comments always welcome and thanks for everything, blogosphere!
Posted by Monica Fumarolo at 9:09 PM No comments:

Why hello there, blog! So nice to see you again. I know I've been neglecting you lately, and I really do feel bad about it. Let me tell you why, though, and I think you'll see where I'm coming from.

The last week has been a bit crazy to say the least in terms of scheduling and being booked. First off, I've been a reading MACHINE, devouring three novels in a matter of days. One of them was The Future of Us by Jay Asher and Carolyn Macker (check out my review of it over on my book-review blog) which seriously made me re-think the amount of time I spend on the internet and another was Five Flavors of Dumb, a work of fiction about a girl who is both deaf and the manager of a rock band at her high school - both books had such interesting concepts! If you haven't read them yet, you absolutely should.

Another thing that happened recently was on Thursday, I completed my grad school class for this semester! This now means I am one semester/two classes away from being DONE with my masters degree in May. *insert happy dance here*

But this is a writing blog, so I bet you're all dying to know what things have been like on the writing front for me. Honestly, I had to take a bit of a break. Not just because life has been reaching new levels of packed, but also after NaNoWriMo, I just needed to take a step back and take a breath.  I was starting to feel like Donna Moss in the West Wing:


See what I mean? My novel is the room with the boxes, and somewhere both written down and in the recesses of my brain is the piece of paper that I made out when this once "really great story idea" hit me and let me know where it was going. I can't find that piece of paper (I'm not even being metaphorical anymore - I really did lose the paper! eek!), but it's all okay because by taking a step back, it all came back to me. Now that November is over, I'm able to slow down my pace a bit (a necessary move for my sanity), but I've also set a personal deadline for December 18th to have this draft done by. Keep your fingers crossed for me, eh?

So that's really it from me for now, though I have to make a final plea. With both this and my other blog, I only have two followers each. If you read this regularly, please subscribe to me as a follower and if you like what you see, tell your friends and family! *steps down off soapbox*

Hope everyone's December is off to a good start!  Comments welcome and keep warm!
Posted by Monica Fumarolo at 8:25 PM No comments:

Monica Fumarolo
There's never been a time when I didn't love books. I love them so much that I have a B.A. in English, an M.S. in Library & Information Science, I'm a high school librarian by day, and I'm an aspiring novelist by night.

City of Bones
by Cassandra Clare