What happened after the first Thanksgiving is perhaps what makes it one of the most ironic holidays ever. I mean, it's a day when we're supposed to sit down with our friends and loved ones, reflecting on what it is we're grateful for. Meanwhile, back in the 1600s when the Europeans started coming here and Thanksgiving began, almost an entire indigienous people were trampled on and their land was eventually taken over. Not exactly nice.

But even though history isn't the most glowing, the spirit of the day is nice. For a visual representation of this festive feeling, I recommend tuning into the Macy's Thanksgiving Day Parade. But for many, today is about three things: food, family and friends. And for some, football.

Little known fact: Benjamin Franklin wanted the national bird to be the turkey rather than the bald eagle.

Little known fact about turkeys: if they look up towards the sky while it's raining, their brains think they are actually out in a body of water and they can drown. Seriously.

Fact about cooking turkeys for this excellent autumnal holiday: Butterball has a hotline :o)

I was 11 years old when I decided that when I grew up, I wanted to be the White House Press Secretary. Not a conventional job choice for a 6th grader, but then I was the only one I knew my age who watched The West Wing. Press Secretary was after a long list of other jobs I dreamed of doing: teacher, astronaut, dolphin trainer, ballerina - the possibilities were endless in my mind, so wanting to work at the White House for a wise and intelligent president with his clever and witty staff didn't seem so far-fetched.

Then Aaron Sorkin stopped writing the show after season 4, and, there's no denying it, things changed.

But my love of words could not be ignored which was why I eventually became an English major and am now working on my masters degree in library science so I can hopefully some day get paid to be around books all the time. And as I re-watched my West Wing dvds, I realized that it was the writing I loved just as much as the characters.

So, in the spirit of Thanksgiving, I'd like to share a bit of that quirkyness with you.

Posted by Monica Fumarolo at 9:47 AM No comments:

Email ThisBlogThis!Share to TwitterShare to FacebookShare to Pinterest
Labels: nerd, The West Wing

One of the biggest news stories this week was of course the royal engagement of Prince William Arthur Louis Phillip of Wales to his longtime girlfriend Catherine Elizabeth Middleton of Bucklebury, Berkshire. (Sidenote: don't British people and towns have the best names?!) I mean, the announcement was even big enough of a deal where my the priest at mass this morning talked about it during his homily. Last time I checked, Catholics and the British Royal Family weren't exactly BFFs seeing as Henry VIII founded his own church when the Pope wouldn't grant him a divorce. Wedding news will be everywhere for the next year discussing churches and the dress and of course, the guest list.

As family, I'd like to think I'd be invited, but I'm not going to hold my breath. I mean, we're not even exchanging Christmas cards with the House of Windsor these days.

Don't believe me? Allow me to explain.

A few years ago, my mom traced back part of her family tree and things get especially interesting when we get to a woman named Joan Beaufort (wife of Sir Robert Lawrence). Her father was Edmund Beaufort, 1st Duke of Somerset.

John Beaufort's father was a fairly well known man in his time: John of Gaunt, 1st Duke of Lancaster.

Now John of Gaunt had a number of legitimate heirs with his first two wives, but he also had four children with his mistress turned third wife, Katherine Swynford. John Beaufort was one of these children. Not to be considered complete bastard children for long, these four were eventually legitimized by the royal family and church when Katherine and Gaunt got married, but with the special proviso that they were specifically barred from inheriting the throne.

Did I forget to mention that John of Gaunt was the 3rd son of King Edward III? Because he was. So of course, while the royals were eventually okay with calling Katherine and Gaunt's four children family, there was no way that they wanted children that came from an affair to ever be rulers.

Considering all this history and the proviso dates back to the early 1300s, it's not really a surprise that the Windsors and I aren't on each other's speed-dials.

Still, it's pretty cool when you're looking at your family tree and hit royalty because then you can turn to the encyclopedia and history books.
Posted by Monica Fumarolo at 12:37 PM No comments:

Email ThisBlogThis!Share to TwitterShare to FacebookShare to Pinterest
Labels: nerd

In honor of our nation's veterans and those still serving to keep our country free,

Thank you for all that you do.
Posted by Monica Fumarolo at 4:15 PM No comments:

On a spring day almost two and a half years ago, I started this blog in preparation for my trip to Verona, Italy. This past summer, a movie came out featuring my beloved city and sharing with the world a story about Romeo's Juliet that I never heard of while I was there: for almost longer than people can remember, people from around the world have been writing letters to Juliet and asking her for advice. For at least the last 70 years, she has been writing back (or at least her secretaries have been on her behalf).

Not going to lie, I'm not the hugest fan of Romeo & Juliet, but I think that's largely due to the fact that the only time I've read it, I was 14 and looking at the situation through cynical 21st-century eyes. I mean, come on. Over the course of four days, a 16-year old and a 12-year old fall in love, get married, and end up committing suicide almost accidentally? Seriously?

But the story is everywhere in Verona and during my six weeks there, I at least learned to appreciate the spirit of the story. So upon seeing the movie and reading the book Letters to Juliet this summer, I decided to embrace the role Juliet has had in my life and I wrote her a letter of my own the day before my 22nd birthday asking her about patience.

Today, my mom came up to my room telling me that I had gotten a letter from Verona, Italy in the mail. My jaw almost hit the floor.

A short, handwritten letter is now laying in its envelope on my desk. Not very long, but still very thoughtful and I'm just still in awe that it's actually here. I don't know if I was expecting some sort of automated, fill-in-the-recipient's-name-here sort of thing, but what I have is great. Not to mention, she offered some great advice and a fresh perspective. Is it hokey? A little bit, but I'll take it. Maybe I wasn't too fond of Juliet when I first read her story, but maybe it's time that I give the play a second chance after all these years. 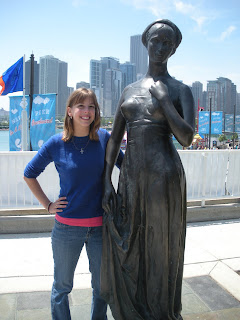 Me and the Juliet statue that stands outside the Chicago Shakespeare Theatre on Navy Pier, a gift from the City of Verona. I also have a picture with her twin that stands under the "Juliet Balcony" in Italy.

Posted by Monica Fumarolo at 12:13 PM No comments:

Monica Fumarolo
There's never been a time when I didn't love books. I love them so much that I have a B.A. in English, an M.S. in Library & Information Science, I'm a high school librarian by day, and I'm an aspiring novelist by night.

City of Bones
by Cassandra Clare